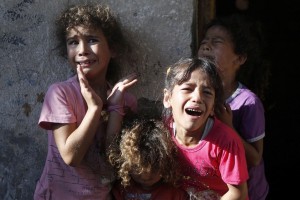 Israel is now introducing farce into its defense of Operation Ethnic Cleansing last summer. The IDF looked around the world for “legal experts” with impeccable credentials as legal scholars, Zionists, & halfwits. They dug up a schnook named Willy Stern at Vanderbilt Law School, Michael N. Schmitt at the US Naval War College (that was a tough one), & Wolff Heintschel von Heinegg, at European University in Frankfurt. What an impressive array of dumbbells. But there are probably fewer & fewer these days willing to make public jackasses of themselves in defense of carpet bombing & they probably have to pay them big bucks, like they do performers.

Our man Willy led the charade with claims the IDF went “beyond any mandates that international law requires to avoid civilian casualties” when bombing “confirmed terror targets.” Like the refugee centers, the hospitals, & the apartment buildings?

Not content to leave bad enough alone, Micky Schmitt claimed IDF warnings like dropping leaflets, calling or texting residents minutes before bombing was not only beyond what law requires but creates a dangerous precedent that could harm “the West” in fighting terrorism. If this isn’t stopped, next thing you know, the US will be texting ISIS?

Wolff & Stern agreed the IDF was not just over-sensitive but “outstandingly sensitive” & takes many more precautions to avoid civilian deaths than required. Once again they’re concerned this will set “an unreasonable precedent for other democratic countries of the world who may also be fighting in asymmetric wars against brutal non-state actors who abuse these laws.” Like the US in Afghanistan, Iraq, Somalia or Saudi Arabia in Yemen?

Some of the precautions they claim employed by the IDF include sophisticated surveillance cameras overhead to make sure civilians have vacated. Like the ones that bombed the four boys on the Gaza beach & claimed they were Hamas naval commandos? They also say the IDF uses a precise weapon system that will destroy “only the weapons cache (or other terror targets) but not surrounding rooms.” Like the ones that took out entire residential neighborhoods & left mountains of cement rubble? These experts might want to shut the hell up because if Israel has those weapons & still bombs children, refugee centers, hospitals, & apartment buildings, that would be evidence of war crimes.

Stern, whose elevator may not go all the way to the top, actually cited a report from the Jewish Institute for National Security Affairs (JINSA) which reviewed Israel’s conduct in Operation Ethnic Cleansing & ruled it unprecedented in its precautions against civilian deaths. JINSA is a flagrantly Zionist think tank (using the term lightly) with an advisory board that includes Joe Lieberman, Dick Cheney, John Bolton, & other scuzzy creatures from the Zionist dark side.

The JINSA report concluded that “Israel’s military restraint unintentionally empowered Hamas to distort both the law & facts for their own purposes to the ultimate detriment of civilians’ safety, for which Hamas bears sole responsibility.” And they go on to criticize Hamas’ use of children as human shields. “Hamas’s playbook calls for helping to kill its own civilians, while the IDF’s playbook goes to extreme–some say inappropriate–lengths to protect innocent life in war.” But what about the charges made by IDF soldiers & veterans in Breaking the Silence claiming the IDF were indiscriminate in going after civilians? Don’t their testimonies from the front make horse manure out of JINSA’s claims?

Israel is scraping the bottom of the barrel here. One would have to be completely stupid or marinated in Zionist crazy-think to buy this kind of defense for genocide. One thing it’s showing is that Israel is on the run. They’re threatened by the growing Palestinian solidarity movement & by BDS. That means we need to continue building BDS with the spirit of evangelists.

This photo is children in Gaza at the funeral of the four boys killed on the beach in July 2014. You can see how reassured they are by the “outstandingly sensitive” treatment of Israeli bombers.