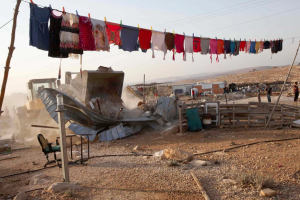 Umm al-Kheir, West Bank: the face of Israeli colonialism bankrolled by the Obama administration & now by China as well.

Behind the clothes line is the rubble of a Palestinian home bulldozed by Israeli authorities because it was built without their permission. Israel is taking down entire Palestinian villages to build Israeli settlements for mooches from all over the world who claim they’re Jewish. But the West Bank is not Israeli territory; it is occupied territory & under international law Israel has no legitimate authority to colonize.