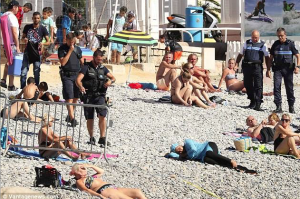 Here a highly-trained SWAT team from the French Gendarmerie moves in with caution on a criminal sunbather in burkini to demand she undress or be sent up the river for life without parole.

She was spotted & caught red-handed by US frogmen dressed in wetsuits during offshore surveillance operations to scout out terrorists vacationing on the Riviera. They’re participating in Operation Burkini Bust because since the Cannes ban went into effect they’ve been arrested & hauled into jail nearly every day under suspicion of being Muslim.

It is reported that cocaine deliveries to the upscale market in Cannes have increased four-fold since SWAT teams were deployed full-time to rout those burkinis off the beach. Mayor Pepe Le Pew of Cannes has threatened the use of riot police if SWAT teams do not successfully complete Operation Burkini Bust.

(Thank you to Haseeb Rahman for sharing this photo with us.)