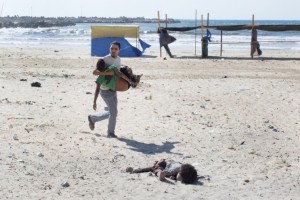 The Israeli bombing of four small Palestinian boys playing ball on a beach & the forced evacuation of a hospital in Gaza certainly distinguish this monstrous siege of Israeli ethnic cleansing; we can only hope they don’t continue to scale new heights of barbarism. And the only thing that can stop that inevitability is massive public opposition.

The photo of the little boys lying mangled in the sand is irrefutable indictment of Israeli war crimes & still the UN & Human Rights Watch (HRW) don’t see the problem & continue to shake the naughty finger at both sides, refusing to distinguish between ethnic cleansing & self-defense.

When asked about the bombing of the little boys, Mark Regev, the spokesman for Netan-psycho-yahu, said “War is a terrible thing.” Banalities are his stock in trade & hopefully don’t indict the entire education system of Australia, from whence he came–unlike the Palestinians they’re trying to destroy who go back generations in the region. He claimed Israel doesn’t target civilians, which is really hard to maintain with a straight face since Gaza has no military of any kind. He claimed Israel doesn’t target children, but who does he think lives in those homes they’re bombing & what about the little kids on the beach who weren’t even four feet tall or more than 60 pounds? In response to interrogation, this smug racist punk said Palestinians are using their kids as human shields. This kind of tripe & toilet-bowl mentality is where racism & Zionist ideology take you.

In his interview, Regev pointed to the endorsement of the Arab League for the cease fire scam Israel used to justify a more murderous escalation of the siege–as if that endorsement rendered it legitimate. Regev is of course not directing that to anyone who knows a damn thing about the Arab League but to those who know nothing. For heaven’s sake, Saudi Arabia has a seat in the League & they’re playing an active role in undermining all the Arab uprisings, most notably in Bahrain. Egypt is also a key member & it should not be forgotten is presently persecuting thousands of Muslim Brotherhood members, with which Hamas has political affinity. That political affinity may be regrettable but one can understand why Hamas would be extremely reluctant to accept their political initiatives with trust. Such trust would be arrant stupidity.

Many look to world governments & ask “Why aren’t they doing more to stop this massacre?” The answer is simple: the neoliberal predators are up to their eyeballs supporting it with loans, military weaponry, arms deals, & political proclamations denouncing Hamas terrorism. They’re not just invested financially in Israel but politically. They are enemies of justice, not allies.

So there is no one to turn to except men & women of good will who want to know the truth. Thousands of solidarity activists around the world are hitting the streets to demand “Stop the massacre in Gaza!” Massive public opposition telling the truth is Gaza’s best defense right now. People often think protests are ineffectual, that governments will do whatever the hell they want unrestrained by our actions. Tell that to the Vietnamese who recognized the power of public protest & held the international antiwar movement in highest regard.

{This is a photo of two of the young victims of Israeli bombing on the beach. Usually I think atrocity images demoralize more than inspire political activism. However, I make an exception with this photo because it indicts Israeli war crimes more powerfully than a mountain of condemnations. It’s another picture worth a thousand lies. The photo should be sent to the UN & HRW, not to goad their consciences–because they have none–but to indict them as collusive with genocide.}

May our little brothers Mohammed, Ahed, Zakaria, & Mohammed Bakr RIP. Our deepest condolences to their family for their loss & our heartfelt regret we are not yet strong enough to stay the hand of genocide.

(Photo by Tyler Hicks, a reporter from the NY Times who witnessed the murderous assault on July 16th & when interviewed acknowledged it would have been impossible for Israeli aircraft not to see it was just four small boys playing ball.)