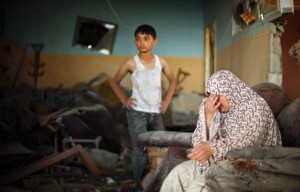 Most of us are overwhelmed with images & reports of unspeakable Israeli barbarity in Gaza & now phalanxes of tanks have entered Gaza supporting an infantry indoctrinated in Zionist ideology & racist hatred. It isn’t worse than US-NATO wars in Iraq & Afghanistan but it is considerably more concentrated & hell-bent on genocide.

We are overcome with grief & terror for the people of Gaza but we continue to organize public opposition in a growing & thunderous international chorus of “Stop the massacre in Gaza!”

This photo is a Palestinian woman sitting in the rubble of her home in Gaza City which was targeted by Israeli bombers under the ruse she harbored rocket launchers in her closet. But Israel isn’t afraid of those; they have the most sophisticated military apparatus in the world & can take most of them out in a trice. What they’re afraid of is intifada–Palestinian resistance to ethnic cleansing. It isn’t wishful thinking or projection that sees resistance & determination written all over this young boy’s face. In all that rubble & carnage, intifada only grows.

And so must our solidarity. The mission of Palestinian supporters is to remain steadfast & not buckle before the onslaught. We have “miles to go before we sleep.” Until the last Palestinian cries “uncle”, we stand with them because that is where justice stands & because staying the hand of genocide has the power to inspire millions around the world to defy power & fight for human freedom.

If you cannot get to a rally, honoring the economic & cultural boycott of Israel is a powerful show of solidarity (barcode beginning 729).