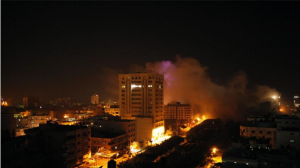 Israel has been pounding Gaza with airstrikes since yesterday. They claim it’s in response to a rocket from Gaza that landed in the Israeli city of Sderot just outside the apartheid barrier caging Gaza. In response to one alleged rocket (for which documentation is not forthcoming), Israel is collectively punishing all Palestinians in Gaza.

Sderot is the town where during the 2014 Israeli carpet bombing siege residents pulled up easy chairs in the hills overlooking Gaza & sat there guzzling beers & waving flags to cheer on the ethnic cleansing of Palestinians.

We need not stand helpless. We need to dry our tears & build the hell out of the economic, cultural, & academic boycott of Israel (BDS).

We also need to stand ready to hit the streets in public rallies to oppose Israeli bombing for purposes of ethnic cleansing.

(Photo is Israeli bombing of Gaza from files of Reuter)