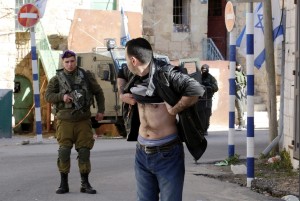 It may surprise many that Israel, which bills itself as the only democracy in the Middle East, does not have a constitution or a bill of rights. When paramilitary terrorist groups set up Israel, they chartered a constituent assembly to formulate one but it couldn’t broker the immense contradictions between conservative Jews who considered the Torah sufficient legal foundation for the colonial state & more secular Jews who wanted a modern constitution to legitimize colonialism.

Democracy & theocracy are mutually exclusive, but more importantly, democracy is incompatible with colonialism & apartheid, the actual legal reality of Israel. The constituent assembly, unable to fulfill its mandate, morphed into the Knesset, Israel’s parliament or colonial administration, which extemporizes a legal framework according to the needs of apartheid.

Last Sunday, the Knesset passed a law allowing police to stop & frisk without probable cause. Probable cause is a fixture in any bill of rights (though habitually flouted in the US Black community). The Jerusalem Post, an unsavory Israeli publication, said the Knesset was “expanding the meaning of probable cause” by eliminating it. When did sarcasm become accepted legal analysis?

Human rights groups rightly protest the law as a flagrant violation of international law & as a weapon of discrimination against Palestinians in Israel. Well that’s exactly what it’s intended to do: harass, humiliate, & assault Palestinians without facing legal hassles. It’s the legalization of racist profiling

The question is why does Israel need such a law when that has been its colonial practice for 68 years? The rationale given is to counter the threat of knife-wielding Palestinians but that’s baloney. Under the occupation of the West Bank, East Jerusalem, & Gaza, it’s routine for Israeli soldiers to body search without probable cause & there’s plenty of photographic documentation for that. At gunpoint, soldiers stop & frisk adult men, adult women (including by male soldiers), old people, & kids on their way to school. Part of the procedure often involves aggressions like kicking the legs or pushing in the back of the knees to make people fall.

This colonial practice goes along with all the other policies like extrajudicial killing of Palestinians; curfews & restrictions on the movement of Palestinians; banning Palestinian workers from Israeli worksites; demolition of homes; torching of homes & mosques; arrest & incarceration of small children; indefinite incarceration without criminal charges. Israel never lets a little stinking law stand in the way of its colonial mission.

Far from being a democratic institution, the Knesset is a colonial administration that will improvise any legal fiction required to facilitate the expropriation of Palestine, including harassment, humiliation, & the constant use of extreme violence.

In this photo, an Israeli soldier is ordering a Palestinian man to lift his clothing for a body search in Hebron, West Bank. We aren’t told, but the young fellow was likely on his way to work or school & there was no reason in the world to suspect him of plotting a crime. This is just pro forma practice under Israeli occupation.

Build & honor the economic, cultural, & academic boycott of Israel. Buy nothing with a label beginning 729.