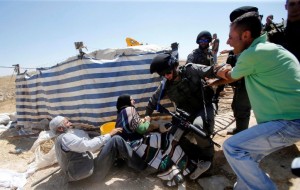 Yesterday, the Israeli government approved $18 million (16 million euros) to fund additional settlements in the occupied West Bank. According to Haaretz newspaper, that amount is in addition to an already allocated $88 million. An estimated 600,000 Jewish settlers now live in the West Bank & East Jerusalem which are Palestinian territories occupied by the Israeli military in 1967.

Netanyahu said the funding was to “assist small businesses, encourage tourism, & strengthen security.” What that boils down to is that Israel is going to strengthen its military occupation to pull off thousands more settlers moving in & taking Palestinian lands against Palestinian resistance.

Colonialism creates disordered mindsets. One Israeli newspaper said a conflict is that the settlements would be on lands ‘to be allocated to Palestinians in a two-state’ scenario. Another said the Palestinians would “demand the territory as part of their future state.” Putting aside that all of Israel is colonial acquisition, the West Bank, Gaza, & East Jerusalem are Palestinian territory which Israel has no right to occupy, organize tourism to, build settlements in, or move in thousands of settlers from all over Kingdom Come to take over Palestinian lands.

One pro-Israeli media source says this new settler project “follows months of Palestinian attacks on civilians & soldiers.” No. Actually it follows decades of Israeli military violence against unarmed Palestinians & when Palestinians fight back, that is Intifada, that is a freedom struggle against colonialism & no part of criminal activity.

These are Palestinians resisting Israeli troops demolishing their property yesterday in the West Bank village of Yatta, south of Hebron–the targeted area for the new settlements. Israeli army bulldozers mowed down two family homes (homes to 25 people), a livestock pen & a toolshed. This is Ramadan time, a special period of prayer & fasting for Muslims. What kind of lowlife barbarians would move in troops & bulldozers to take out homes at such a time?

One Israeli human rights group pointed out there has been an army clampdown in this area because it is the hometown of the two gunmen in the recent Tel Aviv mall shootings. Is Israel setting new standards in collective punishment? Since when do you demolish villages when someone in the area allegedly commits a crime? Does that kind of justice apply only to Palestinians or does it have application in other countries? Or is it just another banal justification for colonialism?

Part of the $18 million is to “assist small businesses” in the settlements which are being hit by BDS. The way to oppose Israeli colonialism & support Palestinian self-determination is to honor & build the economic, cultural, & academic boycott of Israel & demand the end of all military & settlement aid to Israel.