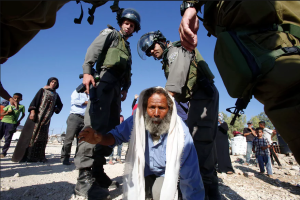 This is one of those photos worth a thousand lies. There’s little reason to elaborate on what’s going on here: the older man on the ground is Suleiman al-Hadhalin being held back by Israeli police as he tries to prevent Israeli bulldozers from destroying his house in a West Bank village which Israeli authorities claim was built without permission.

We can elaborate all the traitorous provisions in the Oslo Accords that allow Israel to preempt international law by expropriating private property in occupied territory. But why treat the betrayal of the Oslo Accords with anything but contempt? It doesn’t matter who the hell signed them for Palestinians, no one had the right to horse-trade & surrender the Palestinian right to self-determination. Not even Yasser Arafat.