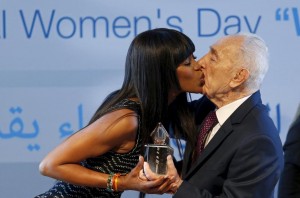 This grotesque encounter is what you get when Israeli colonialism, apartheid, & ethnic cleansing try to feign association with progressive social movements like feminism. British model Naomi Campbell does the obligatory photo op with former paramilitary terrorist & past Israeli president Shimon Peres after he presented her an award at an event commemorating International Women’s Day today at the Peres Center for Peace in Jaffa, Israel.

Actually, given her nearly 20-year rap sheet of anger management issues toward female subordinates, she may be the most appropriate candidate for that award from Peres who has his own rap sheet as a terrorist against Palestinians.

Going back to 1998, she has been sued, served community service, & pleaded guilty to charges by women maids & assistants umpteen times for violence & verbal & physical abuse against them including: several assaults with telephones; threats to throw one out of a moving car onto a busy highway; head-butting one & slamming another against a wall; grabbing one by the neck & violently shaking her head; biting one on the lip & yanking her to the ground by her hair while screaming “You f*****g worthless bitch”; slapping one & beating her on the head with a Blackberry.

She has also assaulted an actress, her drug counselor, & kicked & spit at police at Heathrow after going berserk on a plane.

In 2010, Hague prosecutors, in a case against former Liberian president Charles Taylor for war crimes, claimed Taylor delivered “blood diamonds” to Campbell after a 1997 dinner at Nelson Mandela’s home. Beside her violence, that may be her primary connection to Israel since it is up to its eyeballs in the blood diamond trade.

Blood diamonds (also known as conflict diamonds) are diamonds mined in a war zone, particularly in African countries. They are a plundered natural resource & at the expense of African working people in several countries–most notably the DR Congo. At this time, all diamonds, without exception, are considered blood diamonds by human rights groups & activists though the industry has attempted through a scheme called the Kimberley Process to circumvent scrutiny & continue trading in African blood.

Campbell deserves this honorific for women’s rights about as much as Peres does for peace when he is one of the chief architects of Israeli apartheid & ethnic cleansing.

Use your outrage & visceral disgust to build the economic & cultural boycott of Israel (BDS). Buy nothing beginning with barcode 729.