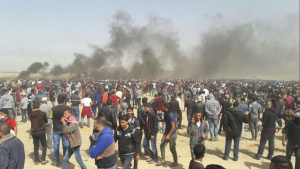 There should be Great Return March solidarity rallies around the world in defense of the democratic right of Palestinians to protest without being shot at as well as the right of refugees to return. The apartheid state of Israel has a Law of Return which allows Jews anywhere in the world who have no connections to Israel & who have never even been there to claim citizenship. That’s what the settler movement is all about: to forcibly remove indigenous Palestinians & take over their lands in a genocide modeled on the extermination of the native peoples in the Americas.

Stand with Palestinians against the violence.

(Photo of march today from Great Return March on Twitter)