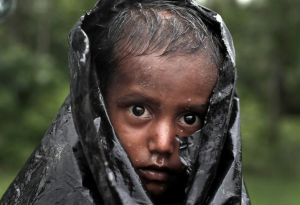 What does it tell you that Facebook collaborates with Israel, India, & Burma to censor the struggles of Palestinians, Kashmiris, & Rohingya under the guise of protecting us from fake news? So how can an organization which sifts through our messages & sells our private data have the temerity to get on a high horse about integrity & fake news? The time has come for censorship on social media to be politically challenged along with the invasion of privacy because they are of a piece. This is what Zuckerberg had to say in a recent interview about Facebook censoring of the Rohingya genocide:

“The Myanmar issues have, I think, gotten a lot of focus inside the company. I remember, one Saturday morning, I got a phone call & we detected that people were trying to spread sensational messages through–it was Facebook Messenger in this case–to each side of the conflict, basically telling the Muslims, “Hey, there’s about to be an uprising of the Buddhists, so make sure that you are armed & go to this place.” And then the same thing on the other side. So that’s the kind of thing where I think it is clear that people were trying to use our tools in order to incite real harm. Now, in that case, our systems detect that that’s going on. We stop those messages from going through.”

There’s something about genocide & the exodus of nearly a million people in just a matter of weeks that makes the news pretty damn “sensational.” No Rohingya, in their private messages or public posts, had any need to dramatize or sensationalize. That’s the method genocidaires & fascists use to justify their crimes, as we know so well from Assad propagandists. Who did FB get that phone call from? Suu Kyi or one of the generals who constantly complain about unfair reporting & fake news photos from the Rohingya genocide? Zuckerberg shamelessly admitted that FB ignored overwhelming, irrefutable documentation of genocide against the Rohingya people, available all over international & social media, including the repeated–albeit wimpy–protests from the UN & human rights groups. Instead, he turned genocide into a Muslim attempt to “incite real harm” against Buddhists. That “same thing on the other side” doesn’t cut it for parity when we’re talking unarmed civilians & a handful of ARSA fighters with homemade weapons against the Burmese military & nationalist death squads armed with high-tech weapons of war engaged in aerial & artillery assaults.

With such a deranged moral compass & faulty detection systems guided by Israeli, Indian, & Burmese censors, FB is in no position to adjudicate what is & is not fake news. Far worse, by censoring Rohingya voices, FB unleashed Burmese nationalists & fascists who were allowed to express vitriolic & poisonous hatred of Muslims & the Rohingya people. What makes the FB admission all the more sickening is that the Burmese military exterminated almost the entire underground network of Rohingya citizen journalists who reported from their mobile phones for several years at great danger to themselves. They were the reporters that FB was censoring as fake news to ‘incite harm.’ There’s an accounting due here. An accounting to those subject to war, occupation, & genocide for trying to silence their voices.

Photo is little refugee boy from September 2017. Just so we remember what news was actually being censored.