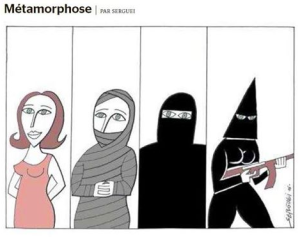 Was chasing down the source of this Islamophobic cartoon on Twitter which the tweeter said was from Le Monde. It resonates with Charlie Hebdo’s so-called satiric genre & it would be alarming, though not surprising, if that genre became the acceptable norm. Maybe losing that burkini battle really inflamed Islamophobic editors in France.

Incidentally in my search, I came across an archive of 129,000 articles debating whether Hebdo is racist or satiric. To my mind, “Charlie Hebdo est raide mort” (that’s “dead as a doornail” to google translate) so I hate to add another paragraph to the debate. But let me say that if you have to explicate every one of their cartoons to persuade us they are not racist but in fact hilarious social commentary, perhaps you need to consider where your purpose in life is taking you. Off the deep end, if you ask my opinion.

Isn’t there an ancient canard going as far back as the first bum joke by Homo Erectus that if you have to explain the joke, maybe the problem is not its subtlety but its lack of wit? Readers still laugh themselves silly at Greek & Roman satirists. The Canterbury Tales is over 600 years old & it’s been a while since I read it but its fart jokes remain among the most memorable moments in world literature: “No deeper toot was ever heard in hell.” Nobody has to explain that even to a ten-year-old.

One of the most worthless arguments is that Hebdo’s humor is particularly French, meaning ‘oh so sophisticated.’ If the magazine itself leaves you cold, those defending it with that argument will have you in stitches. Moliere doesn’t need 129,000 articles to explicate his wit; Daumier doesn’t need professorial tracts to make us laugh. They’re brilliant & even though I’m an unsophisticated rube from the American Midwest, I really get their wit. They make Hebdo look like trash.

There was one defense of Hebdo that rankled & did not amuse me & that’s the one by Katha Pollitt in The Nation titled “The Courage of Charlie Hebdo.” I don’t find The Nation a particularly insightful magazine & as a feminist I have a lot of problems with Pollitt’s politics on the issue of targeting Muslim women. She’s an Islamophobe & at least once, maybe twice in the past few years I have responded to her articles to protest her prejudice pawned off as feminism. Only Pollitt could turn loud-mouthed racism into courage.

After that trip down bad memory lane, I was unable to verify that this cartoon came from Le Monde. I post it because Muslim women are particularly targeted by the haters & war-mongers. Satire is to skewer the debaucheries of the oppressor, not make a laughing stock of the oppressed.