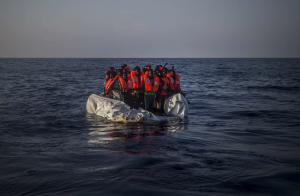 Media doesn’t often report the details of what’s going on with the refugee crises in the Mediterranean. There’s complete silence about what NATO ships are doing in the Aegean Sea to thwart Syrian, Afghan, & other refugees on the Turkey to Greece route. They call that mission “stemming illegal trafficking & illegal migration.”

This week, in a breach of the usual silence, Reuters reported that Libyan patrol boats have intercepted & turned back more than 11,000 refugees so far this year. Just in the past few days they turned back 1,425 refugees, including children. They report that 120,000 have managed to reach Italy where another set of horrors awaits them, including rampant sexual abuse of unaccompanied children.

Reuters also breaks the silence on the number of fatalities on the Libya to Italy route. As of September 6th, nearly 3,200 sub-Saharan refugees have drowned this year according to the International Organization for Migration (IOM). UN refugee officials reported in May that drownings in the Mediterranean are up 35-percent this year. How does Frontex (the European Union’s naval operation against refugees) explain that when for over a year they’ve had fleets of European warships & sophisticated aerial surveillance equipment monitoring that route? How have drownings increased when rescue ships are on the spot?

How is forcing them back to Libya a solution to the refugee crisis when the country is the center of a new war between ISIS & US special forces?

The worst part is that this crisis isn’t going to end. The UN refugee agency reports this week that the number of South Sudanese fleeing civil war is now over one million, including many orphaned children. Keep that in mind the next time you read panegyrics on the humanitarian work of George Clooney & his associate (& likely CIA agent) John Prendergast. Clooney, Prendergast, Jimmy Carter & Kofi Annan played a role for the US in brokering the secession of South Sudan from Sudan which has proven a humanitarian tragedy of civil war, starvation, repression.

These refugees awaiting rescue & return to Libya are in a partially punctured dinghy about 13 miles off the coast of Libya.