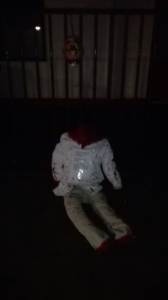 Last Thursday, a decapitated, bloodstained doll was hung by a rope from a fence in front of the Emir Sultan Mosque in Amsterdam with a note warning against “Islamization” in the Netherlands. The aggression was claimed on Twitter by Rechts in Verzet (Right in Opposition), a far rightwing political group which uses a photo of Dutch politician Geert Wilder as their masthead on FB (https://www.facebook.com/rechtsinverzet/).

Geert Wilder, a racist Islamophobe obsessed with what he calls “jihadism” is an elected politician who leads the campaigns against “Islamization” not just in the Netherlands but in all of Europe. He likens the Quran to Hitler’s “Mein Kampf” & calls for it to be banned, calls for a ban on construction of new mosques & a ban on Muslim immigration. He is an agnostic who has made a religion out of Islamophobia combined with ardent Zionism.

After its formation in 2014, Wilder associated himself with Patriotic Europeans Against the Islamization of the West (Pegida), a German nationalist far-right movement with political ties to European fascist groups. Wilder has spoken at their rallies across Europe. That Pegida has an Israeli affiliate & is associated with Zionism only exposes the real character of Zionism as a rightwing political current rather than an emancipatory movement against the persecution of Jews. Swastikas & Nazi salutes stand side-by-side with Israeli flags at Pegida rallies even though the nationalist attacks on mosques, temples, & Jewish graveyards come from these same forces. Zionism, nationalism, libertarianism, fascism & Assadism are of a piece.

It is of considerable political importance to note that leading Assadists & their journals, including Eva Bartlett, Vanessa Beeley, & Global Research, also have associations with European fascism which is why their rhetoric about “jihadism” & “Islamization” in Syria resonates with that of Pegida, Wilder, & Rechts in Verzet who hung the decapitated doll on the mosque gate.