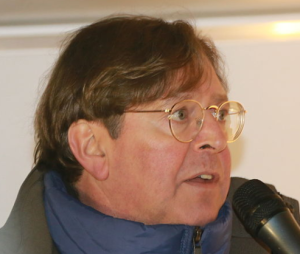 Assadist sites on social media are mourning the death of one of their own: Udo Ulfkotte. Global Research is reposting articles about him, including “World Class Journalist Spills the Beans, Admits Mainstream Media is Completely Fake” & “Editor of Major German Newspaper Says He Planted Stories for the CIA.”

Michel Chossudovsky, the Dr. Demento of Global Research, said: “His unbending commitment to truth in media as well as his legacy will be remembered.” Actually, a review of his tawdry legacy makes any tribute seem like monumental sarcasm.

Ulfkotte was once editor of a well-known German broadsheet. The nature of his departure while still in his 30s is not reported but may have been less than cordial since reckless accusations by him against several countries likely threatened the paper with litigation or firebombing, not to mention damage to its reputation.

Not having gainful employment gave him time to engage in political activity. He was a member of Stop Islamisation of Europe & founder of Pax Europa. If you follow the smelly trail of these groups you find they are part of a European network of nationalist, far right, anti-Muslim organizations under the umbrella of the CounterJihad Europa coalition, including groups like English Defence League, Hooligans Against Salafists, & Patriotic Europeans Against the Islamisation of the West (PEGIDA). Ulfkotte was an organizer & platform speaker at their marches in & outside Germany.

In 2014, Ulfkotte published a book titled “Bought Journalists” describing how the CIA & other spy agencies forced him to publish articles under his name written entirely by them. He said he felt remorse, shame, & “misused” for accepting CIA money & being a propagandist for the CIA but that he was coerced because noncompliance meant he would lose his job. There goes that “unbending commitment to truth” thing because hundreds of journalists lose their lives, not just their jobs to report the truth. When no respectable journal would hire Ulfkotte, he began contributing to right-wing Truther sites where he made quite a name for himself as a racist hate-monger who demanded all Turks, Arabs, & Muslims be forcibly deported.

The pièce de résistance of his independent journalism was his 2011 claim that Turkish women farmworkers in the strawberry fields of Austria urinating & defecating on the plants had caused the 2011 E. coli outbreak in Germany. He described it as a “fecal jihad” waged by Muslims against Europeans & did not retract that when German health officials identified the cause as cucumbers from Spain.

Russian media, including RT, brought him out of obscurity in 2014 because his venal lies served Putin’s purposes. Global Research, recognizing his kindred spirit, picked him up at the same time.

It’s a pity he wasted his life on hate mongering & that’s all there is to say.

(Photo is Ulfkotte speaking at a PEGIDA demonstration in 2015.)