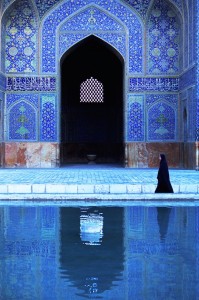 So as media tries to wind us up to a frenzy of Islamophobia after the massacre in Pakistan by the Islamist Taliban we should look at some of the artistic & architectural achievements inspired by Islam to understand that the politics of the Taliban are driven by something other than the Quran.

When I first discovered what is called Islamic Art in the early 1970s, it was like falling in love; I had such an affinity with the aesthetic & would spend hours & hours in the galleries. Perhaps the genre is too broadly defined because the Islamic empire included vastly different cultures all influenced differently by Islam–but I didn’t know that then.

Art is a very powerful force giving one insight into the soul of a culture & into its heart, & sometimes into its traumas. It’s inconceivable that the kind of vision which created this beautiful edifice & thousands of others even more magnificent could possibly generate hate. The Taliban are not rooted in Islam but in colonialism. And if we don’t get that, we’ll be looking for answers for why this massacre happened in all the wrong places.