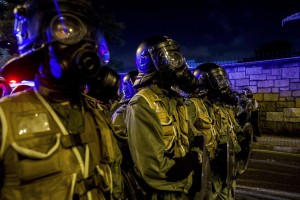 The Cold War myth is that democracy is the political system of capitalism & tyranny the political system of socialism. Stalin’s gulag lent a certain persuasive power to that fabrication but you could look around the world & see it didn’t make a bit of sense. Capitalism is more often associated with dictatorship & repressive juntas than with the kind of so-called democracy we have in the US.

We can never be dismissive of the Bill of Rights but in fact for most of US history (& this is true in other countries) working people have had to fight tooth & nail for the right to speak their minds, publish what they think, & protest for what they believe. US history is a battleground of democracy against state repression. You don’t notice this contradiction with the Bill of Rights unless you actually stand at odds with US policies. But the history of the labor & civil rights movements in particular will stand your hair on end for the violence used against protesters.

These riot cops in gas masks are in capitalist Hong Kong (where the capitalist operations of so-called socialist China are negotiated) facing off against hundreds of thousands of democracy protesters. Do you think that Cold War stuff might be a bill of goods? Do you think Mao’s “Little Red Book” might need a little updating?

Winning the right to protest without police violence is becoming increasingly more difficult in every country & ending that violence is central to the struggle for democratic rights.

Our fullest solidarity with the democracy movement in Hong Kong.