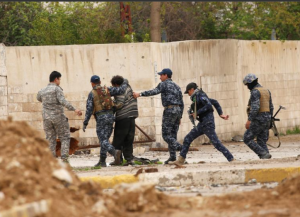 Things are going well on the front lines of Mosul:

–Iraqi soldiers continue to fire rockets into residential areas before checking to see if civilians have been able to clear the area & won’t be harmed;

–a 16-year-old boy who lost his leg in crossfire is trying on prosthetics;

–Iraqi soldiers are stepping over bodies of men dressed as civilians but identified as ISIS fighters though how they make the distinction is unknown;

–Iraqi soldiers cornered an ISIS fighter & are arresting him here–only to learn he is a man with learning disabilities, not an ISIS combatant.

US out of Iraq & Syria! Out now! Terrorizing, displacing, murdering thousands of civilians is no way to fight ISIS but only to subordinate the civilian population.