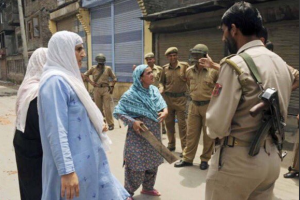 After watching women play a leading role in the Arab uprisings in Egypt, Bahrain, Yemen, Syria, & in Palestinian & Kashmiri resistance to occupation, we ought to be able to lay to rest this rubbish about needing the US Pentagon to rescue Muslim women.

It isn’t reported what these Kashmiri women are saying to the occupying soldiers but the plank is probably being used for emphasis.