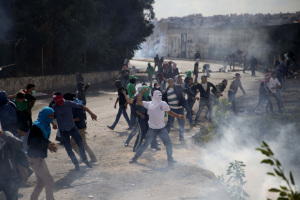 You cannot tell from here if this is Palestinian or Kashmiri Intifada: fearless youth armed only with rocks up against occupying armies shooting live ammo, rubber-coated steel bullets, tear gas grenades, & in Kashmir pellet rifles.

According to the UN, which is better at counting victims than demanding justice for them, Israel’s occupying army has injured over 2,679 young people since the beginning of this year. According to another agency, over 62 Palestinians have been killed by Israeli soldiers in the past year.

These young protesters are depicted as terrorists, both by Israel & India. Israel has made rock throwing punishable with jail terms but under administrative detention it doesn’t need any cause at all to arrest Palestinians, including children, & hold them indefinitely without charge. Not unlike Kashmir’s Public Safety Act where nearly 500 youth have been booked in the past 92 days for protesting & rock throwing.

You can see the character of military occupation: no rights at all. And most important & deadly, the targeting of children & teens to head off & destroy Intifada, the fearless resistance to occupation & self-determination.