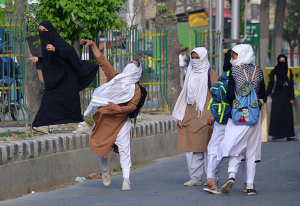 Today is International Women’s Day, historically a day for women to stand together in struggle against injustice & inequality. Women’s unity & feminism are mocked these days in the most primitive, divisive, & desperate ways. Women’s leadership is mocked by those who choose to stand with the oppressors against suffering humanity. But there is a new energy, manifested by the upwards of four million women who marched in 2017 & 2018 on every continent demanding immigration rights, reproductive rights, protection in the courts against rape & sexual assault, economic justice & equality, the end of war, occupation, genocide.

We should particularly honor the women of Kashmir, Palestine, the stateless Rohingya, Syria, Iraq, Afghanistan, Yemen, Bahrain, Egypt, Libya, Somalia, the oppressed castes of India, Black & Latina women in the US, Mayans in Guatemala, refugee women, & so many others on the front lines of struggle for women’s rights, human rights, & the end of war, occupation. persecution, genocide.

(There are hundreds of photos of thousands of Kashmiri women protesting, including by kicking army trucks, but this is one which captures the breadth & defiance. From Al Jazeera, 2017)