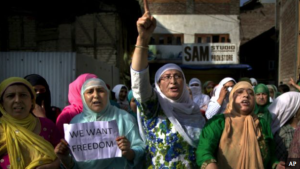 The Indian military occupation of Kashmir is governed by two so-called laws. The first is the Armed Forces Special Powers Act (AFSPA) enacted in 1958, which is regrettably modeled on a 1942 British colonial law to repress the Quit India Movement led by Gandhi. Since 1958, India has used it against dissent in several of its own states & began to apply it in Kashmir in 1990.

Basically, the law renders impunity to the Indian military for human rights crimes by its personnel–an impunity the military takes full advantage of. The US has wrangled similar agreements from Iraq, Afghanistan, & other countries it occupies to protect its personnel from prosecution for the unspeakable war crimes they have committed.

The second so-called law employed by the occupying army in Kashmir is the Public Safety Act (PSA) in force since 1978. Under PSA, the Indian army can arrest & jail a person without trial or legal counsel for up to two years on the mere suspicion that they might ‘disrupt law & order’ in Kashmir. It is administrative detention powers exactly like those used by Israel against Palestinians, including children. Israel has given itself authority to extend the time of detention indefinitely & it is almost certain that India pays no heed to the two year limit.

In Kashmir, it was estimated a few years ago that over 27,000 people had been arrested & jailed since 1978 under the PSA, including peaceful protesters, political activists, lawyers, journalists. During this current military offensive, it is reported at least 140 Kashmiris have been arrested under the PSA but it is likely hundreds more will be before this murderous siege has ended.

There are reports that Khurram Parvez is being held under the PSA but this is not confirmed by the Jammu Kashmir Coalition of Civil Society (JKCCS) which is centrally involved in his defense. He is of course being held in administrative detention without due process.

The JKCCS is circulating this petition demanding his release. Please take a moment to sign & share it: https://www.change.org/p/director-general-of-police-release…

Photo is women protesters in Kashmir disrupting law & order according to the PSA.