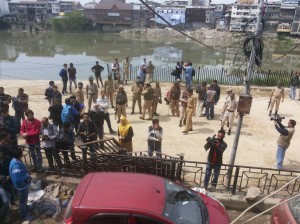 This is the scene earlier today when police laid siege to the offices of the Jammu Kashmir Coalition of Civil Society (JKCCS) which had organized a press conference where family members of the young girl sexually assaulted by Indian armed forces in Handwara could address the media.

Indian police prevented journalists from entering the office, prevented staff members of JKCSS from leaving, & banned the press conference. It isn’t certain if the complete internet blockade in Kashmir is still in force.

Nothing exposes the criminality of the Indian occupation more than the denial of democratic rights & the shutdown of access to journalists & social media.

(Photo from FB wall of Khurram Parvez, a staff member of JKCCS)