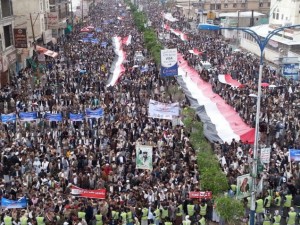 Millions of Yemenis hit the streets on March 26th to protest one year of massive Saudi-led, US & UK-backed bombing which has created a humanitarian catastrophe in Yemen, including child starvation, where more than 82% of the population now needs some form of humanitarian aid & critical infrastructure has been destroyed. There was barely a peep in media about the protests.

This is the scene today in Sana’a demanding an end to the war against Yemen. There was no media coverage at all but only a photo of flooding in north Yemen. The flooding is newsworthy but since they don’t report massive flooding dislocating millions of people in countries around the world, it’s curious that the Yemen flooding caught media attention. The flooding is significant for sure, but the over one year of carpet bombing is more significant because with a devastated infrastructure, the flooding damage is even more catastrophic. Antiwar protests of millions whilst the bombing goes on are of monumental political importance & again there wasn’t a peep in media about them.

Our deepest respect & solidarity with the Yemeni protests. Long live the Yemeni uprising!

End the war against Yemen!

(Photo is from twitter feed of Yemeni activist Hisham Al-Omeisy)