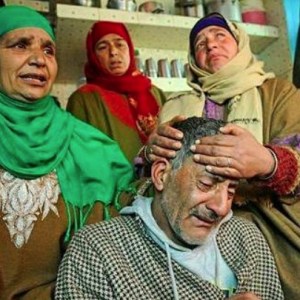 Three unidentified women console the father of 24-year-old Suhail Javid Lone who saw his son shot to death in front of their family home when Indian occupying troops fired indiscriminately at unarmed civilians last Saturday in the Shopian district of Kashmir. We know they fired indiscriminately because we have photographic evidence. Twenty-year-old Javid Ahmad Bhat, another unarmed youth, was also killed. Both died from bullet wounds to the head. There is no report that either young man was involved in stone pelting or in protesting–though neither is an offense punishable by execution under international law. Nineteen other civilians were injured, some of them critically & requiring specialized treatment.

Just within four days last week, Indian troops killed at least three & seriously injured six other young people, one as young as 12, by bullet wounds to the head. An international tribunal on Indian war crimes in Kashmir would likely judge that to be attempts to summarily execute youth in Kashmir.

Indifference to the occupation of Kashmir is not an option. Help build an international movement in solidarity with their freedom struggle. Our sincere condolences to the families & friends of Suhail Javid Lone & Javid Ahmad Bhat. May their beloved sons Rest In Peace.