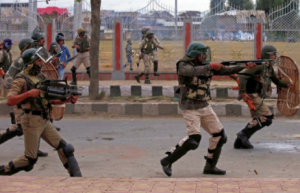 Another photo worth a thousand lies: take a close look at this photo of Indian occupying soldiers in Kashmir. Its time & place aren’t specifically identified but it appeared in Indian media in an article titled “Two civilians killed as army fires at stone-pelters in Shopian” on January 27th, 2018. Are they charging stone pelters & unarmed protesters with machine & pellet guns in an urban setting? This would be called documentation for reckless disregard of human life violating every standard of human morality & countless international laws.