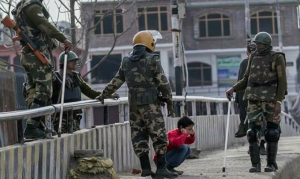 The Indian occupying forces must have been certain the small Kashmiri boy was hiding an assault rifle in his backpack. Otherwise they would never scare the hell out of him by ganging up five soldiers armed to the gills against a little kid.

There is growing concern in the Indian government about the suicide rate of soldiers deployed in Kashmir & among veterans after their return to India. The Indian military claims it’s due to marital problems, debt, psychological issues but we know from the astronomical suicide rate among US soldiers & veterans & the growing suicide rate among Israeli troops in Palestine that what is unbearable to soldiers & drives them to suicide is the monstrous crimes they commit against men, women, & small children. Kashmiris can hardly be expected to empathize with the soldiers but an anti-occupation movement in India can use soldier suicides to build broad public opposition to the occupation.