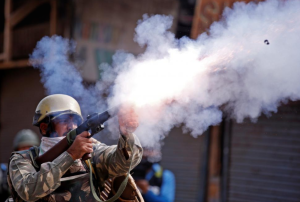 In Western media, this photo could be called a first. For years there has been no coverage at all of Kashmir, including in photojournalism. After Kashmiri activists on social media made bare minimum mainstream media coverage necessary, mostly what was published was Kashmiri women’s prayer rituals & during this military siege infrequent photos of lone male protesters. If you wanted any real coverage you had to go to social media–FB & Twitter where at least for now, there’s less censorship than on FB.

Here this guy, who the caption calls an Indian policeman but is clearly attired in army fatigues, is shooting tear gas shells at unarmed protesters in Srinagar today.

The picture is of little other interest except as one of the rare moments when a fragment of truth got past media censors about what is really going on in Kashmir & for that matter in Palestine, both under military occupation.