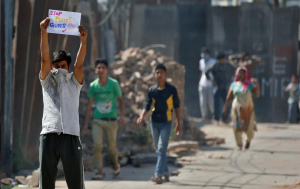 In response to legal actions submitted to the Jammu & Kashmir High Court in July to prohibit the use of pellet guns, the munitions manufacturer submitted a letter to the court on September 6th about the lethal nature of pellets.

According to Khadki, the manufacturer, there are over 600 rounded or sharp-edged lead pellets inside the type of pellet cartridge used by Kashmir police. The letter explained to the court that pellets, also known as buckshot, are generally used for hunting animals & that no tests have ever been conducted about their effect on the human body. It is not irrelevant that there are restrictions on their use in hunting wildlife in the US, not known as a bastion of human rights for animals.

In response, the Indian-controlled state government of Kashmir said that pellet guns do “not violate protection of life & personal liberty to citizens” & that pellets are fired below the waist. To explain away why most of the injuries are to the upper body, particularly the face & eyes, the state government in an affidavit to the court offered this pathetic legal defense: “However, as the protesters & the members of the agitating mobs are mostly bent or in kneeling position so as to pick up the stones, which they hurl & pelt upon the police personnel & in this position, there is every chance that such protesters would be hit above the waist line.” Just one question: does incapacitating, damaging, disfigureing legs, knees, feet, butts, & genitals have no relationship to long-term health, life & liberty?

Of the between 9,000 & 12,000 protesters & bystanders injured in the past 67 days, most have been from pellet guns & about 700 have suffered disabling pellet injuries to the eyes causing partial or permanent blindness & disfigurement. It’s time we stopped repeating the fiction that they are any form of non-lethal weaponry.

It’s interesting to note that the Ammunition Factory Khadki near Pune, India which manufactures the pellets appears to have grown out of an Indian army base stationed there during the colonial era which had two ammunition factories.

End the use of pellet guns. End the occupation. Self-determination for Kashmir.