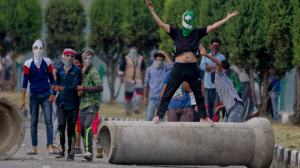 The arrest of Khurram Parvez with no legal basis brings up the issue of all Kashmiris arrested in protests since July 9th. It’s likely that in the turmoil of the military siege many have been arrested & are not yet accounted for. On August 8th, only four weeks into the ten week siege, Indian military officials admitted to arresting 1,300 youth. Many were picked up in nighttime raids for participating in protests.

How many more have been arrested since then? Where are they? Have they been charged with a crime & provided legal counsel? Or are they buried in the gulag to be held indefinitely without charge under administrative detention–as is used so profligately against Palestinian youth by Israeli military officials? This is a matter of grave concern since India, like Israel, employs systematic torture of its political detainees, including beatings, electric shock, & other methods too gruesome to describe.

Investigating illegal arrests, torture, disappearances is the kind of political work Khurram Parvez & the JKCCS engage in. He is now being held under administrative detention so defending him is part of defending the other activists from being lost forever in the gulag or ending up disappeared in mass graves.