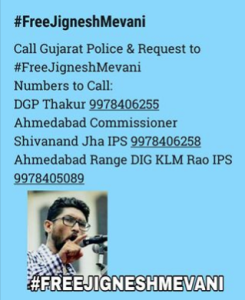 The struggles today against racist oppression in all its malignant forms–including the war on Black youth in the US, expropriation & cultural destruction of indigenous peoples on every continent, caste oppression In India, anti-immigration campaigns–are among the most important struggles historically. Racism of such violence & mayhem has not always existed & it can be ended. But not without titanic & committed struggles against those who profit so lavishly from it.

Racism is integral to modern capitalism which could not function without such violent & ignominious inequalities. Racism is integral to war & to the oppression of women. The pity is, it’s all a big fat ugly stupid lie that some human beings are born superior & some inferior & it’s a lie humanity can no longer live with because it has caused & continues to cause genocides & unspeakable crimes against millions of people.

Jignesh Mevani is a young Dalit activist in the Indian state of Gujarat leading the resurgence of the anti-caste movement in India. Yesterday, on returning from a speaking engagement in another state, he was arrested by Indian police & his whereabouts are still unknown.

His arrest & that of Khurram Parvez, the Kashmiri human rights leader, are of a piece with prime minister Modi’s political agenda for India which includes maintaining caste oppression, Kashmir as a colony, pogroms against Muslims, & the entire panoply of neoliberal capitalist economic inequalities & plunder.

Their fate as leaders against racist oppression is of consequence to all humanity who care about human rights & who detest the squalid concepts of racism.

Those of you who live in India can take immediate action by calling the numbers listed to protest. Dalit & human rights activists in India are preparing ways we can all participate in Jignesh Mevani’s defense if that becomes necessary.