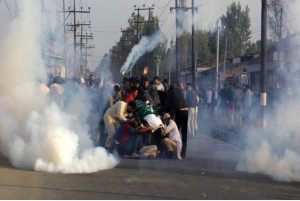 This is the funeral last October of 12-year-old Junaid Ahmad who was killed by pellet injuries to his head & body. Residents in the area said the young boy was sprayed with pellets while he was on the lawn outside his home which was near a protest but Indian authorities claimed they shot him while he was protesting. It was in the period of mass uprising after the execution of the young man whose name & image cannot be put on FB without censorship but whose funeral was attended by 600,000 mourners.

Honestly, does it really matter whether they killed an unarmed young schoolboy while he was standing on his lawn or while he was protesting? What gives India the right to shoot at unarmed protesters? Does India, which calls itself a democracy, not allow protests without violently assaulting them? Clearly not, since the funeral procession/protest for young Junaid was also fired at with pellet guns & tear gas. The mourners here are struggling to hold up the funeral bier while at the same time ducking a barrage of tear gas shelling & pellets.

Indian army officials like to claim they are forced to fire in self-defense from attacking mobs & stone pelters. Hard to claim that when you show up at the funeral of a young boy you killed & start shooting. Some would call that a provocation, even outright military aggression amounting to a human rights crime. Maybe not Indian media or Fox News, but most sane people.

Officials said they attacked the funeral–actually they said the attack was warning shots that accidentally fell too close to the mourners–to keep protests from spreading. A more certain way to stop protests from spreading would be to stop shooting at protesters & funeral corteges. They would end them completely if they ended the occupation & left Kashmir for good.

Indian media thought they were being slick when they asked “What was a 12-year-old boy doing in a protest? Why did his parents allow him to go out?” As if Indian soldiers shooting at unarmed protesters was the fault of indulgent Kashmiri child-rearing practices & not a brutal occupation. Slick. But not slick enough.