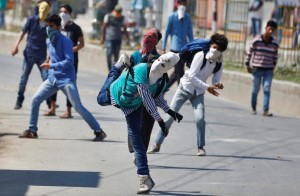 A few days ago I posted this photo of a recent protest in Srinagar against India’s plan to resettle thousands of Kashmiri Hindus, known as Pandits, in Kashmir.

The flight of 60,000 Pandit families in 1990 (about a year after the Indian military occupation of Kashmir in 1989) is frequently used by Indian nationalists to discredit the Kashmiri struggle, including in discussions on my wall.

I had not studied the Pandit issue & tried to correct that but my sources were inadequate. I should have discussed better sources with my Kashmiri friends on FB to get an understanding but regrettably did not. Just as Israel, the US, & media portray Palestinians as terrorists, India portrays Kashmiri Muslims as terrorists to justify the occupation. Many sources portray the flight of Pandits as a result of Muslim extremists or even as an ethnic cleansing but if you think about it, that explanation makes very little sense in the context of India’s massive military occupation of Kashmir.

This is an important issue & clarity about it cannot wait until my research catches up. So it would be invaluable for Kashmiri activists to explain the issue to us. Please don’t take umbrage at our ignorance. We’re working on it.