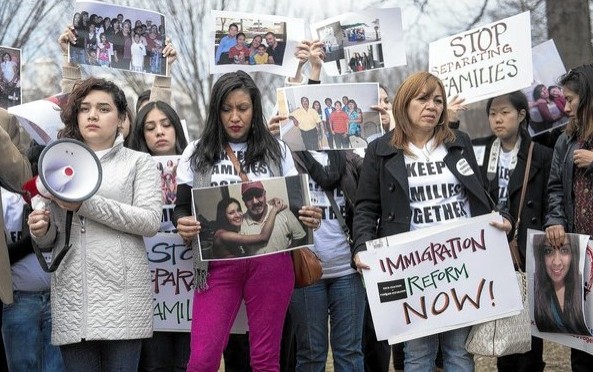 After raking in the Latino vote by promising immigration reform, Obama remained true to form for the Democratic Party & continued militarizing the US-Mexican border; accelerated the massive deportation of undocumented workers (including separating children from their parents & dumping thousands of kids in the barbaric foster care system); & refusing to give amnesty to immigrants who had come here as children with & without their parents. He pulled a fast one on the latter, offering them a deferment after he got their names & addresses so immigration authorities know where to pick them up when the deferment ends.

Ever the bullshit artist & annoyed that immigration rights activists would embarrass him by demanding he deliver on his campaign promises, Obama tried to dump the blame on the Department of Homeland Security (DHS) which now governs immigration. Actually the DHS was appointed by Bush when that bozo was president & is a cabinet position so it’s likely the president continues to call the shots on DHS & immigration policy. Obama also tried to blame the Republicans which is a part of the two-party shell game as old as the republic itself. Boy it’s tiresome!

Immigration is a human right. Our hats off to these activists standing in the freezing cold last Wednesday to demand their human & democratic rights & for showing the rest of US working people what it takes to win justice.