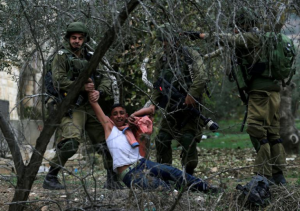 How many Israeli soldiers does it take to assault, brutalize, & arrest one Palestinian freedom fighter? Photo after photo show several ganging up on just one Palestinian child or teen. This young man is being arrested near the occupied West Bank city of Nablus at a protest today.

Just in the first five days after Trump showed the hand of the US-brokered peace process by making Jerusalem the capital of Israel, 1,175 Palestinians were injured, 4 were killed, & at least 200, including children, were arrested by Israeli occupation forces.

There is no bantustate solution to the Palestinian demand for self-determination against colonialism, apartheid, ethnic cleansing. The only just & workable resolution is the Palestinian proposal for a democratic secular state where Palestinians & Jews can live as brothers & sisters. That begins with defeating the military occupation of the West Bank, East Jerusalem, & Gaza.

Stand with Palestinians by honoring & building the economic boycott (BDS) of Israel. Check the label on every product to make sure its country of origin is not Israel.