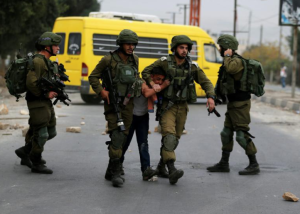 This is another photo of Israeli occupying forces manhandling & arresting a young Palestinian boy at the protest today near Nablus in the occupied West Bank. You cannot tell me that engaging in such monstrous brutalities against children does not fully take its revenge on Israeli society. The exact same is true for the Indian occupying army in Kashmir.

There is no more powerful long-term & massive documentation of that reality than the psychological problems of US soldiers & veterans from its endless wars & occupations. The evidence is in PTSD & mental illness rates, levels of suicide (22 per day), alcohol & drug addiction, homelessness, incarceration, domestic violence among US veterans. You can teach the young racism & how to irrationally hate in basic training. But you cannot eviscerate their human soul & the ability to recognize another human being when they beat the crap out of them, brutalize them or shoot them down. Most soldiers are not raised to be murderers so when the military tries to inure them to violence, it creates psychos & deeply disturbed people.

Palestinians, Kashmiris, Iraqis, Syrians, Rohingya, & so many others can hardly be expected to feel empathy for the direct agents of their oppression. But those who want to build opposition to occupation & war & to rebuild the international antiwar movement need to draw on veterans to testify to the brutalities & use their experience & influence to end such violent depredations.