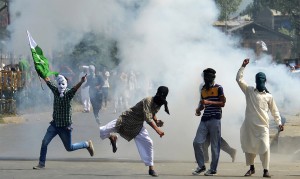 Eid is a holy, festive Muslim holiday of thanksgiving to celebrate the end of the month of Ramadan. Kashmiri Muslims celebrated it yesterday on the same day as Pakistan & many Arab countries. Over 100,000 people attended prayer services in three different venues in Srinagar.

You can see in this photo how the Indian occupying army respects the religious traditions & political freedom of Kashmiris. According to witnesses, they used tear gas & flashbangs (sound bombs) against protesters chanting freedom slogans after Eid prayers. As Kashmiri activists have pointed out: this is how Eid is celebrated under occupation.

Many of the protesters waved Pakistani flags either in political support or as a symbol of dissent against the occupation. It’s their country. They can wave any damn flag they like.