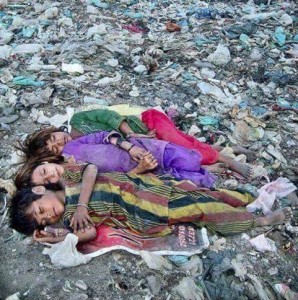 There is no reliable metric for homeless children in Sindh province but in all of Pakistan there are an estimated 1.5 million. Some are victims of massive flooding, some of massive US bombing, some are Afghan refugees. Likely most have been displaced by neoliberal economic policies dispossessing farmers & rural workers along with victims of urban slum clearances for purposes of gentrification & the neoliberal kind of “development.”

Homelessness for children isn’t just a problem in Pakistan. Worldwide the estimates of homeless children go as high as 150 million. But that may be conservative since after the first 50 million who is really counting? Millions of children around the world die before reaching their fifth birthday; 250,000 die every week from diseases & starvation; over 10 million children are slaves, including sex slaves in the pornography & prostitution trades; millions are abused, sexually exploited, murdered, or go missing; over 20 million children are refugees or displaced in their own homelands; estimates of child workers range from 250 million to 500 million.

These are the realities for tens of millions of children under neoliberalism, the barbaric phase of capitalism. How is it that children have become not just the chattel but the offal of capitalism?