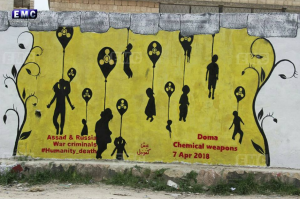 Hillary Clinton is calling for the US to take out Assad’s air fields to “prevent him from being able to use them to bomb innocent people & drop sarin gas on them.” For doing so, she’s getting a lot of support from libertarian anti-Assad forces. These supporters of US bombing in Syria illustrate so well the essential character of cognitive dissonance in modern politics: that dissonance where war is peace & counterrevolution becomes revolution. And vice versa. The Assad opponents who call for US bombing in Syria get around the issue of US military aggression & bombing of civilians in Afghanistan, Iraq, Yemen, & Libya by pulling the Clinton maneuver of calling for bombing Assad’s air fields. But in principled politics you just can’t have it both ways. That cognitive slick trick has to be exposed because it’s on a political continuum with Assad propagandists calling for Syrian & Russian bombers to defend Assad’s national sovereignty. If the US attempts to bomb Syrian air fields, we’re looking at an armageddon scenario because it is certain Syria, Russia, & Iran would not allow that to happen.

When in her entire political career has Hillary Clinton ever been put off by bombing innocent people, by chemical gas attacks, by exploitation of suffering humanity for personal gain? Where has she ever expressed a modicum of squeamishness about any of that? When she facilitated US investments in Burma midst the Rohingya genocide? When she collaborated with Bill Clinton to turn Haiti into a sweatshop haven after the 2010 earthquake? In her support for all US wars, particularly during the months of bombing Mosul & Raqqa into dead zones, including with the use of white phosphorous? When the US dropped the Mother of All Bombs in Afghanistan? But still we’re asked to believe that in Syria she’s morphed into a champion of the people?

The anti-Assad forces who call on Trump, notorious for psychopathy & racism, to save the revolution in Syria with bombs weaken the epic struggle against Assad by handing the forces of fascism an ideological weapon. They should stop shouting down the left which does not exist & stop looking to US bombers as a salvation army. If they stop war mongering for US bombing in Syria, it will be possible to build an international solidarity & antiwar movement on the basis of principles. The only principled demands are for the immediate cessation of Syrian, Russian, & US coalition bombing in Syria & the immediate, unconditional withdrawal of all foreign military forces from Syria.