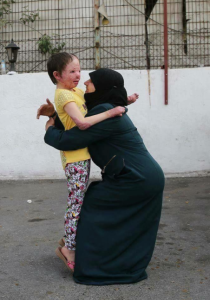 Heba reunites with her mother after 8 months of separation. She had been transferred from Idlib, Syria to Istanbul for treatment of burns all over her body from a Russian airstrike.

Nothing more need be said to condemn the role of Russian bombers in Syria. Except shame on those who defend Russian military intervention & shame on the Hands Off Syria Coalition who promote the bombing of civilians as a freedom struggle.

Every blessing to little Heba for a speedy recovery in the arms of her family.

Stop the Syrian, Russian, US bombing of civilians in Syria. All foreign military forces out now!