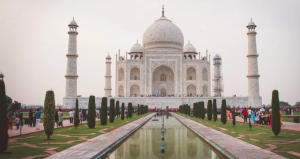 Abhijan Choudhury is showing me his photo album of the extraordinary Taj Mahal which he pointed out is 500 years old. Now he tells me he lives near another monument nearly 800 years old.

It reminds me of the time about 2007 when my friend Melanie Benson, a city bus driver in Minneapolis, asked me to drive some lost passengers from her bus to the St. Paul Cathedral near where I lived.

The passengers were tourists from Mexico City & wanted to visit the cathedral, which I didn’t want to tell them wasn’t that impressive & actually quite stodgy. Until I left Minnesota, I’d never seen anything over 75 years old other than the cathedral because Indian culture had by my youth been effaced. So to impress them, I mentioned the cathedral was nearly 150 years old. The man made some unseemly gurgling noises in my direction & haughtily told me the cathedral in Mexico City was closer to 600 years old.

It must have a profound affect on a culture to grow up with a sense of such ancient roots & ancestry. It certainly creates an uprootedness for those of us without such a sense of cultural heritage & history.