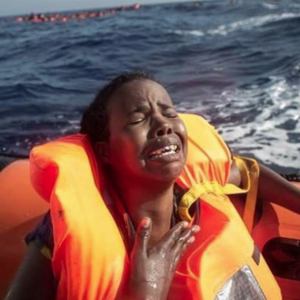 An African mother grieves after the drowning of her baby in the Mediterranean when an overpacked refugee boat suddenly listed sending 200 occupants into the sea. At least 34 people drowned, most of them toddlers according to rescuers.

It’s not certain from reports where the drownings happened but it appears to be in Italian waters because the Italian coast guard commented to media about it although it does not participate in rescue operations. The survivors were rescued by the group Migrant Offshore Aid Station (MOAS), a private rescue group.

This bereft mother is in a rescue boat off the coast of Lampedusa, Italy, an island refugees are trying to reach & which has always welcomed refugees as fellow humans, even at times denouncing the Italian government for its criminal misconduct toward refugees.

Our deepest condolences to the families of those who drowned. There are no words sufficient but only action to defend the right of refugees & immigrants to asylum with full rights.