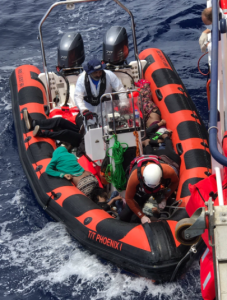 Normally, it’s advisable to avoid gruesome images, not to shelter us from the cruel realities millions of others live with nor out of feigned squeamishness about facing reality, but because people more often feel overwhelmed & discouraged by the magnitude of human suffering rather than inspired to fight injustice.

But we do need to bear witness to the refugee crises so we have no excuse not to act. There were 34, mostly small children victims of the incident yesterday. This is a MOAS rescue vessel bringing in the bodies of some who drowned. There have been several hundred who’ve drowned so far this year in the Mediterranean & no agency that has a clue just how many.

Two UN refugee agencies keep tallies but in fact no one is monitoring how many people are stuffed into boats nor how many boats are leaving Libyan shores. Tens of thousands have set sail. Fifty thousand have been rescued at sea. Three years ago, it was estimated that already 25,000 had drowned in the Mediterranean, turning it into one of the world’s largest graveyards. This has gone on for years without political action except for the massive protest a few months back in Barcelona & smaller protests in Italy. This is the same scenario on the US-Mexico border; in Bangladesh, Malaysia, India, Indonesia, Australia, Turkey, Greece & eastern Europe. Thousands of Rohingya refugees were left stranded in boats to drown in the Andaman Sea in May 2015 & not a single agency or human rights group has uttered a peep of concern at this monstrous human rights crime.

The hallmark of neoliberalism, the barbaric phase of capitalism is wars & refugees. How we respond to those issues determines the future of humanity, the world our children will grow up in, & the values they will hold.

Our response must be to demand governments open the borders & grant asylum. No human being is alien to us.