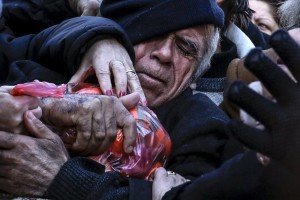 When the obituaries are finally written for the neoliberal phase of history, special condemnations will be needed for the treatment of children & the elderly. It is an era disgraced with child labor & sweatshops & massive impoverishment of seniors–all sanctified in IMF/World Bank policies. Greece isn’t the first or only country to face the wrath of capitalist greed but it is a bellwether of what will happen if these attacks on working people are not decisively thwarted & reversed.

This elderly man is at a protest in Athens, Greece over the government’s attempts to ravage the pension system. They’ve reduced pensions already a dozen times at the demand of Eurozone bankers, raising many questions including that of national sovereignty. But of course that whole Eurozone contraption was a method devised by European capitalists to sustain their system of private greed against meltdown.

Can you imagine that one of the primary targets of the Eurozone bankers is seniors too old to work but not to old to want to enjoy not working!? None of the criminal partners in this pension heist are providing an actuarial analysis of the cutbacks they’re demanding & media estimates don’t agree. But beside raising the retirement age, seniors are being asked to live on pensions of €360 (£275) (US$391) a month. A one bedroom apartment with essential utilities in Athens costs US$422 a month. That’s what’s called an abomination.

The Pensioners protesting have been joined by thousands of farmers using their tractors to block highways & thousands of other workers because part of the attacks on pension rights includes exorbitant taxation & higher contributions to pension plans. The tangerines being given free to this protester are being dispersed by protesting farmers. The solidarity is magnificent but seniors should not have to depend on free food to eat a square meal.

Unions have also called out their members, on one occasion for a 24-hour strike. Enough with the paltry solidarity, the political equivalent of shaking the naughty finger at the government. What is required is the coordinated exercise of political power, shutting down the country if necessary (which is the very power of working people) to end these monstrous policies turning seniors into impoverished beggars & children into sweatshop workers.

We stand squarely with the protesters of Greece. Je suis Greek seniors! May they bring the bankers to their knees.