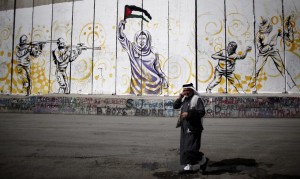 This is Palestinian graffiti on the apartheid wall in the city of Bethlehem in the occupied West Bank. Graffiti murals are the popular art of political rebellion against tyranny & unbearable conditions of life. They have been most prominent in Northern Ireland, the Egyptian & Yemeni uprisings of 2011, & in the Palestinian struggle. It is usually a guerrilla art form, done under cover of night so muralists are not shot or arrested.

Graffiti murals have long played a role in US Black & Latino communities so that now municipalities & arts councils are attempting to preempt it as a political art form or act of insubordination to inequality. They want to control it as mural & establishment projects for beautification of tenement, rundown neighborhoods. Beautification is good. Gentrification is not. Decent, affordable housing is better.

Graffiti art will always be used for political protest when human beings are denied expression of their democratic rights in other ways. Charlie Hebdo could learn a thing or two about caricature from these murals if they could ever sever their art from racism & social hatred & use it instead to campaign for the oppressed.