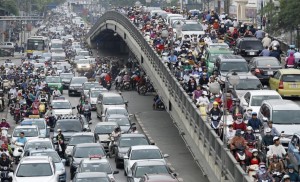 Good morning, Vietnam! Neoliberalism has arrived. When millions around the world opposed the Vietnam War, it wasn’t to defend socialism but to oppose US military barbarism–though many hoped ending US intervention would lead to the free development of a socialist society. But in the 1980s, the leadership of Vietnam cast its lot with the IMF & World Bank & transforming the centralized-planned economy into private enterprises in a market-based economy began. Thousands of companies have been privatized since then. Just between 2014 & 2015, Vietnam has targeted the transfer of 432 businesses to private investors.

Only twenty years ago, bicycles were the dominant mode of transport in cities & there was an extensive, state-subsidized public transportation system. Under IMF privatization, public transportation has been destroyed & mopeds & automobiles dominate the streets & continue to increase in numbers, traffic congestion, & pollution.

This is where neoliberalism conflicts with coherent urban planning (not to mention social life) & where there are apparent disputes between the Vietnamese government & IMF/World Bank advisors about how to proceed. Vietnam wants to reduce city traffic by building satellite townships outside Hanoi with business parks & industrial zones. Both the regime & IMF identify poor infrastructure as a major obstacle to economic development but when they speak of infrastructure they don’t mean improved roads & railways for public transportation but to transport goods from the growing sweatshop enterprises to waiting planes for delivery to US & European retailers.

The regime & IMF are in complete agreement on seeing too many people as the problem behind traffic congestion & compulsory population control programs have been operative for years. Women played a leading role in opposing US intervention & now their rights to reproductive freedom are being sacrificed to neoliberalism & private profit.

Until recently, most of the privatization was in light industries, trading, & tourist services. The government dominated in telecommunications, air traffic, railways, & energy. The IMF is dissatisfied with the rate of privatization & profit & is putting the screws on the regime to step it up which only means more economic & political dislocation & stress for working people. Hopefully the skills used to defeat the mightiest military machine in history & send them packing in 1975 will be used against the regime & a free society built to honor the sacrifice made by so many.

(Photo of Hanoi by Kham/Reuters)