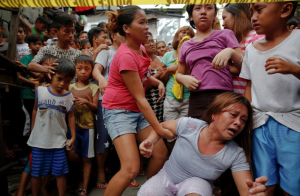 Global Research, a fountainhead of the most detestable & crackpot politics, published three articles in November about Duterte’s reign of terror in the Philippines. This journal is the cesspool from which libertarians draw their confusions.

One article by Tony Cartalucci tried to run apologetics for Duterte’s vigilante death squads by claiming US expressions of opposition are feigned & opportunistic. Political insights like that are so banal they make you feel as much embarrassment as disgust for Global Research. Our man Cartalucci says ‘it is more than possible” for Duterte to take out “criminals” in the Philippines with some dignity. But who’s talking about criminals? We’re talking about suspected drug addicts & small time peddlers. We’re talking about due process in place of death squads.

Another article by Marjorie Cohn puts aside concern about those death squads because “significantly” Duterte is talking peace with “revolutionary forces” engaged in 47 years of armed struggle against the Filipino government. Cohn didn’t say but she probably likes Duterte’s anti-American grandstanding so much she wouldn’t want any militias taking pot shots at him. She also claims Duterte is taking action against US military & economic power in the Philippines. What kind of action would that be? Calling Obama “the son of a whore”? Tough talk like that didn’t bring the US Pentagon or IMF to their knees but Obama must have been inconsolably weeping for days.

The third article would be a classic of that post-truth truthiness thing if it weren’t such a detestable & intellectually bankrupt defense of vigilante death squads. It’s titled “Anti-Americanism in the Philippines: President Duterte’s Subaltern Counter-Hegemony” & is written by E. San Juan, Jr., a Filipino-American with prestigious academic credentials. This guy’s Ivy League education in the US did not go to waste in simple-minded apologetics. No indeed. He thought it necessary to go all the way back to the 19th century & trace the history of US colonialism in the Philippines to bring us up to Duterte’s death squads & brush their violence aside with penny-ante foolishness about the progressive character of Duterte’s anti-Americanism.

We suggest the halfwitted professor & apologist for death squads talk to this young woman about that “subaltern counter-insurgency” crap & get her take on it. Her name is Janeth Mejos & she is devastated as the body of her father Paquito is carried out of their Manila home last October after he was murdered in a shoot-to-kill police operation. Many families told Reuters reporters that their beloved were unarmed & pleading for mercy when police opened fire. The police are carrying out Duterte’s orders & as such are immune from prosecution.

While the professor is interrogating Ms Mejos on her views about “subaltern counter-insurgency” it would also be a good time to ask her how she sees Duterte’s anti-Americanism, his trash-talking Obama, what she thinks about those negotiations with guerrillas, & about US opportunism. The professor might not want to stick around to hear her response which we suspect would be ungracious, even rude, in the extreme.