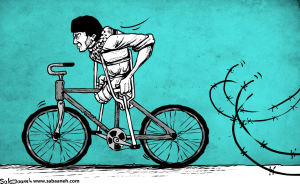 A sardonic & quite wrenching mockery by Palestinian cartoonist Sabaaneh of the Giro d’Italia cycling tournament going on in Israel now. The race, one of the three most prestigious in the world, is usually held in Italy but the officials were bribed $28.3 million by Israel & a Zionist settler from Canada to hold it in Israel as a way to undercut the cultural boycott (BDS).

The route of the race travels within a few kilometers of Gaza, where Israeli snipers are shooting peaceful protesters in the legs. Five athletes, including one cyclist, have had legs amputated from explosive bullets. Giro 2018 is the analog of the Nazi Olympic games 1936 in Berlin.