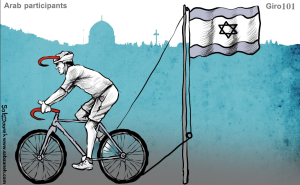 This is Palestinian cartoonist Sabaaneh’s mockery of athletes from Arab countries participating in the 2018 Giro d’Italia. That includes a team from Bahrain, where there is extreme repression after the 2011 Arab Spring uprising, & from the United Arab Emirates, which played a central role in the Saudi-coalition bombing of Yemen & runs arbitrary detention facilities which use torture. The governments of those two countries would not see solidarity with Palestinians & compliance with the cultural boycott of Israel as politically advantageous. Israeli politics are more their speed.

What’s perhaps even more offensive than Bahrain & UAE’s participation is that South Africa has a team in the race. What is it about Israeli apartheid that the South African government doesn’t understand? But of course the US, Australia, & several European countries have teams entered, including Switzerland. So much for that neutrality thing. Despite the persecution & mass deportations of African refugees, including Eritreans, the Israeli team has an Eritrean refugee riding for them.

The primary purpose for running the tournament in Israel is to counter the cultural boycott & all of the participating governments know that. Israel’s minister for strategic affairs who oversees efforts to counter BDS said the fact that they successfully bribed Giro to come to Israel (he didn’t put it quite that way) “is a huge achievement in & of itself that strengthens Israel’s legitimacy.” That would be more true if the race weren’t being held at the same time as the Great Return March in Gaza where Israel has killed at least 43 & injured over 6,000, including by shooting them in the legs with explosive bullets requiring amputation in many. Giro 2018 in Israel is the analog of the Nazi Olympics 1936 in Berlin.